Remember you need all DLCs

I will start the game this night (European time)

Good luck and have fun

So… have we lost Karsenduerotin? Does anyone have him/her in their Skype contacts to check?

I hope we haven’t lost him. It’s only been a couple of days.

Hi everyone. I’m leaving for a vacation for 3 weeks and won’t be able to play. Squidgeny will be replacing me and playing instead, I’ll arrange the swap with the admin. This is just to let you know so you aren’t suprised when you start seeing a different player.

Have fun on vacation.

Hey I’m back! Thanks for squidgeny for playing in my stead. Let’s see what happened since… Brazil’s dead too, huh? This might be fun.

Anyone know if karsten is okay?

Don’t know. He has disappeared in all his games. I hate booting people, but I may boot him soon if he doesn’t return or post his whereabouts and ask us to wait.

Oh you’re talking here? Sorry, I hate how it doesn’t send any notifications.

I’m for booting Karsten. I’ve tried contacted him, he hasn’t replied and I’ve seen him playing other games on Steam, so he probably lost interest. Normally I’d suggest getting a replacement but since this in the unpatched game plus it keeps crashing, it’s probably not that interesting to take. We can finish just the three of us, I guess?

BTW, geoff, I’ve tried to send to a friend invitation on Steam to do some diplomacy. But I’ll understand if you’d rather keep this a silent game, I can appreciate singleplayer multiplayer

Markus, I didn’t see your friend invite until now. I just accepted. I like diplomacy

I vote to boot Karsten, but I don’t know how to do it in this game. The game host is no longer with us, and I think only the game host can boot people. Maybe the site admin can do it for us?

Oh I though you’d become the host after the other players were killed off. So you don’t have the option anywhere here on the game’s page?

I posted a message for the owner of this page. He booted him, so the game is rolling again! 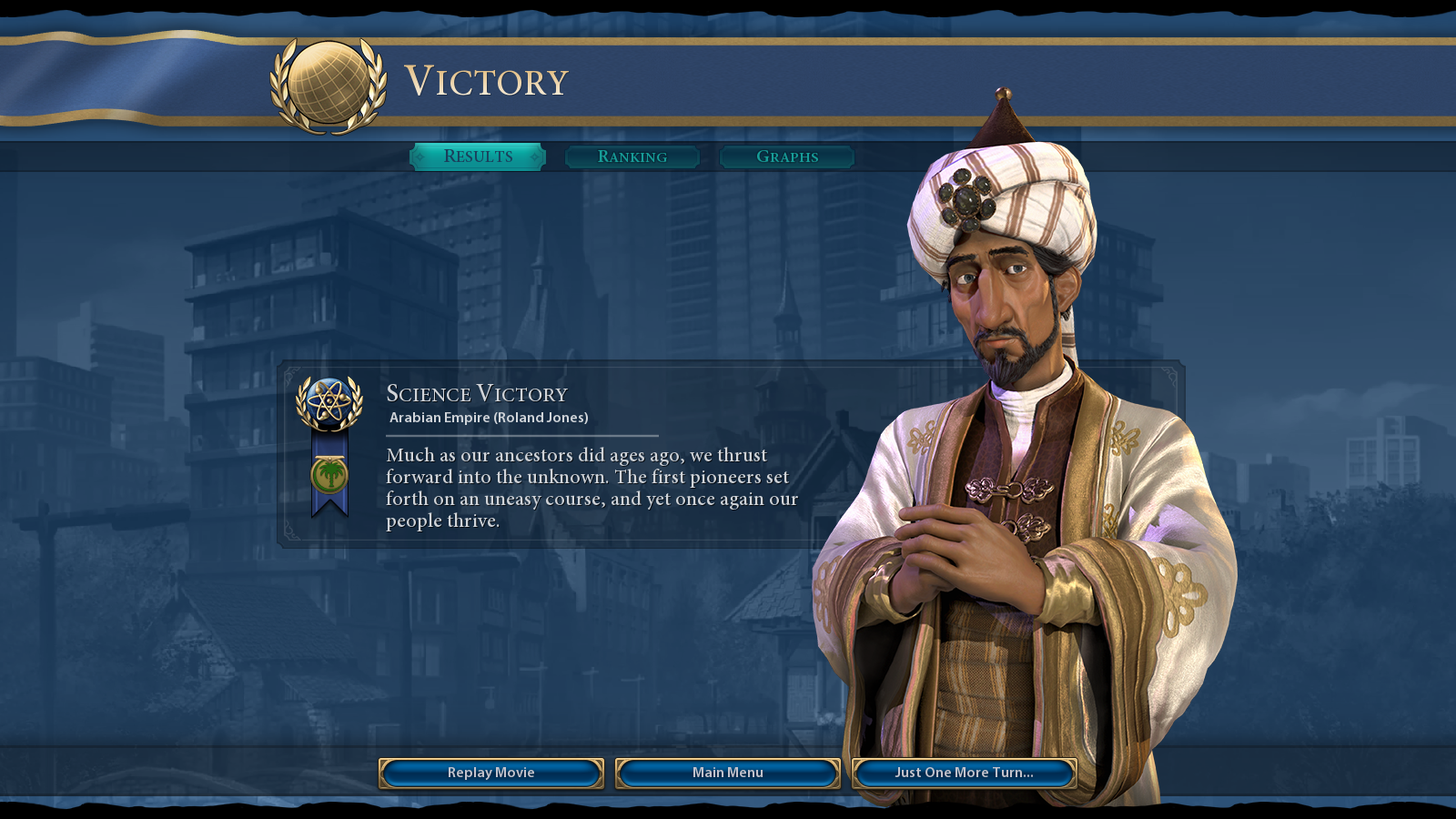 That was fun. Wish that Spain didn’t quit before the end, since it tilted things in my favor while I was already in a good position, but, oh well. Good game, everyone.

Congratulations on the victory. Well played. This game was fun, but also frustrating. I started in tundra and snow so I knew it was going to be a tough game.

Inquisitors are frustrating to play against. All you need is a few of them and you can stop any religious attempts in your land.

Congrats! In three turns I would be pillaging your launch site by a stealth bomber but yeah, you were faster.

A tough opponent, and I still don’t understand how you got so much ahead in tech. Being Arabia helps, I suppose.

I’ll take a look at the graphs again and post any you two want, but I think an early lead helped, since getting ahead in science lets you build better science stuff, while getting ahead in Culture gets you Natural Philosophy and eventually Rationalism, both of which help your lead snowball. Towards the end others were apparently matching some of my yields, but since I was ahead for so long I was still ahead even when you caught up in terms of output. (I think I was ahead in tech even before I got my madrassas, though, though my religious building’s bonus might have helped a bit. Part of it is how I play; I’m not exactly sure what I do differently, but I think my focus on early expansion and stuff helps me get a good lead. I try to get a second and even a third city ASAP, get districts placed early and built after the basic infrastructure like a granary is in, etc. I don’t know; I kind of wish I could see a turn-by-turn comparison of build orders and actions and such for the early game of some of the games I’m in so I could see what I do differently, because it consistently works yet I don’t really know how what I’m doing differs from what I hear most people do.)

Also, stealth bomber pillaging was a good idea (though it’d have had to be the right one; I actually built a couple of extra launch sites before realizing that, thanks to the production there from Ruhr Valley and such, plus eventually the boosts I got nabbing the +100% production Great Scientist and Engineer, it was faster to just do it all in Medina, so the ones in Mecca and Cairo were basically just decorations/distractions); I had some good spies on counterspying duty, plus I was running Cryptography. Probably should have included Police State as well honestly but the flavor of the card makes me stay away from it. Either way, just blowing things up instead of relying on spies was definitely the way to go.

Tangent, man, if you can get partisan recruitment to work, it can be pretty nasty. I saw some modern armor barbarians get spawned in your lands close to the end there. (Also, made a nuclear sub for distance nuking just in case, but it was still like eight turns away from getting close to you when I finished stuff; it was basically there in case you two somehow sabotaged my launch and I wanted to be spiteful. Dunno if you had your AAs/mobile SAMs up yet or not.)

The sumbarine wouldn’t have worked, I was following it with the destroyer armada. I was aware of the risk of sumbarines and was making sure none would slip through. Nukes are scary, though. I did manage to get some SAMs a couple of turns ago though I’m not sure how much they’d help.

This was a nice game, I had a lot of catching up to. Learned a lot.

In a way, though, I’m clad that it ended because the constant crashed were annoying and it was taking too long.