Especially for Byzant, as he drew Egypt again.

Turn order is different, I think we’ll be alright as long as they don’t sync up.

Byzant picked Egypt, actually. After I noticed that I considered just picking Saladin since I like him but it was too late to change. But Kongo is cool so I’m fine with this.

Anyway, my start is looking better this time. Once again, no fresh water, but I’m Kongo so after the early game that hopefully won’t be a problem.

Yeah, I’m much happier with my start this time around. We’ll see how that ends up.

I’m Brazil and seemingly landlocked, I don’l think I’ll get to use my super ships.

I wonder what the world will look like. I went full random and it’s always pretty undpredictable.

I am definitely not landlocked. I might be on another peninsula or something. Maybe even an island? Haven’t seen enough to say.

Today has been a productive day. 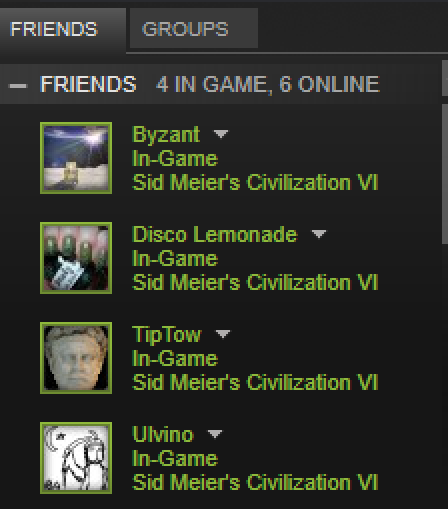 Hi everyone, I’m on a vacation till Sunday so my turns might be a bit slow in coming. I still can play morning and evening, so it shouldn’t be that bad. Just wanted to let you know.

Hahaha, yes, got my average turn time under an hour again.

Also, jeez. My feelings towards my position are a bit mixed now. Still better than last time though.

We need more religions in this game. Everyone make a religion. And then spread them to me.

We’re all on PC right? With the patch coming and all…

Everyone being PC players was a condition for the last game, yeah, so no Mac-related disruptions here.

By the way, we ended up being in almost the same positions as in the last game, even though the player order has changed. Interesting…

Yep, I’m off in the west and constrained by ocean, Tiptow is nearby and south of me bordering tundra, Ulvino is to my north by either ocean or a long, curving stretch of land, Byzant and Disco are off in the east doing their own thing, and markus is stuck in the middle of it all.

Hopefully things go better for me this time. I’m not planning on picking fights with Ulvino this time, at least.

I am going on vacation starting tomorrow (8/8). I’ll have my surface so I should be able to get my turns in, but they’ll be longer than usual.

I’m also on a vacation this week. I have my laptop and I can play no problem in the mornings and usually in the evenings too, so hopefully you shouldn’t notice much of a delay. But it’s possible that the turn will sometimes arrive in a bad moment and I won’t be near the computer for half a day or so. Again, this shouldn’t happen that much but I just wanted to let you know.

I will be out of town from today until Sunday. I am unsure of WiFi availability–will of course try to get my turns in if able. Sorry for any holdup!