Hey guys, should be a fun game w/ three of us on normal pace. I’m east coast, work 8-5 M-Th for the summer. I take my turns usually from 6pm on and will always double check before bed; and, morning if I don’t hit snooze too many times. End of August I’ll make moves throughout the entire day

We all got somewhat non-aggressive civs. Should be a good game.

I live Hawaii, play early in the morning and when I get home from work. Sometimes will play at lunch if the wife isn’t home. As you can see by my turn timer, I take turns regularly.

Fast turns today. Helped by my eyes opening at 1:30am and yep, Im awake and playing civ.

I have the same problem Valamas. I wake up early and think about which Civ turns I might have to play. 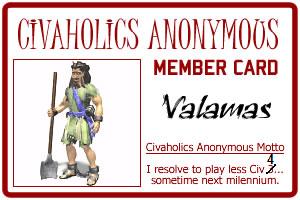 Civaholics Anonymous recognizes that one has a problem, and they want help to cure the problem. I recognize I have a problem, but I don’t want to be cured

It was good to get a catchup sleep. Im going fishing today. So not so many turns today.
Yesterday was great, we got a good start on the game.
Really digging this PYDT system.

No worries. I’m eating lunch but heading back to work soon. Enjoy the fishing.

Early Game Experience:
Game pace is enjoyable compared to most PYDT’s being “Online Speed.” Makes this early game barbarian hell a whole new level of difficulty. I had a horse breeding barbarian camp and yeah… horse archers and horsemen early game when my warrior takes 9 turns is rough! I have a decent campus though, so there is that!

Ya, standard speed is the best. I have played online and quick speed and don’t like it, makes unique units less important. I had one barb horsemen spawn and chase my warrior all the way back to my city before finally killing it, but other than that no barb problems here…probably because I’m backed into a corner.

Out of all the games I have going at the moment, some are quickish speed and most are standard speed; this game is my favourite right now.

Ill only make standard games from here on. I am used to the pace as that is what I played against the dumb AI in single player (not wasting my time on that anymore).

My next game I am looking to create a team human vs team AI deity. Something like 1-2 ratio. Would make the human team level deity perhaps.

I have tried changing my settings around, manually accessing cities, and w/e I can think. Game consistently crashing where I cannot complete a turn. Just tried to force turn forward and skip selecting city production, however, that too caused a crash. Reverted turn in hopes that fixes it.
My suspicion is something about the reduced production cost of units sped up my cities current production, and it is now not registering correctly. No clue beyond this.

I see it is now my turn. Lets hope we can keep going. See how you next turn/s work out.

so one cycle. voting for unit production did it since those are my two issue cities that spat them out expedited.

So Geoff needs to revert the turns I think

Ok, I will revert the turn. Vote for something different.

I voted A Gold on the first choice.

I voted A Cultural on the second choice.