selected these game modes for a balance of military vs. non-military special-stuff, avoiding too much chaos though.

Difficulty Emperor so the barbarians and city-states aren’t pushovers, but also manageable

Good luck to all! 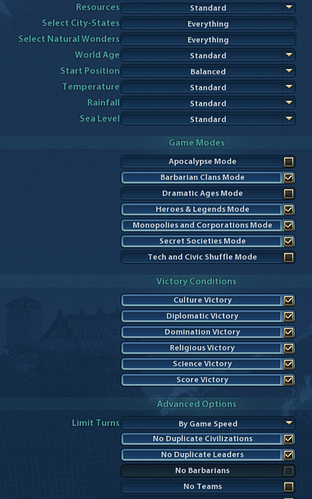 Yog Sothoth put a mark that he was on vacation and had not been walking for two days. Maybe he won’t walk anymore. It can be replaced by another player. After all, the game has just begun.

Indeed, thanks for the vacation note, all good in the hood

no need to apologise it’s part of the game.

Good game, everyone, Gaul did not stand the test of time

Don’t you think it’s time for us to stop cjcjameson ??? We are unlikely to stop him one by one. And when he captures me - you even two can hardly beat him … Maybe it’s time to stop the expansion of the Khmers to the east?

cjcjameson GG ! I think you win this game))))

Sorry folks, one more World Congress but close to the end