Why no Byzantium and Gaul Pack?

Not sure what DLC everyone has, so kept it the same as last time. I can include them if everyone has all the DLC.

I have all DLC, and would be down for an all DLC game. Although some of the new civs are really strong! Been farting around w/ onesixty2 in some multiplayer games

I’d love to join if you’d have me…

OK. I’ll enable everything. Anyone have a view/preference on Secret Society’s or Heros mode?

@Karstenduerotin - I’ll remove the password, I was just holding places for the other guys. 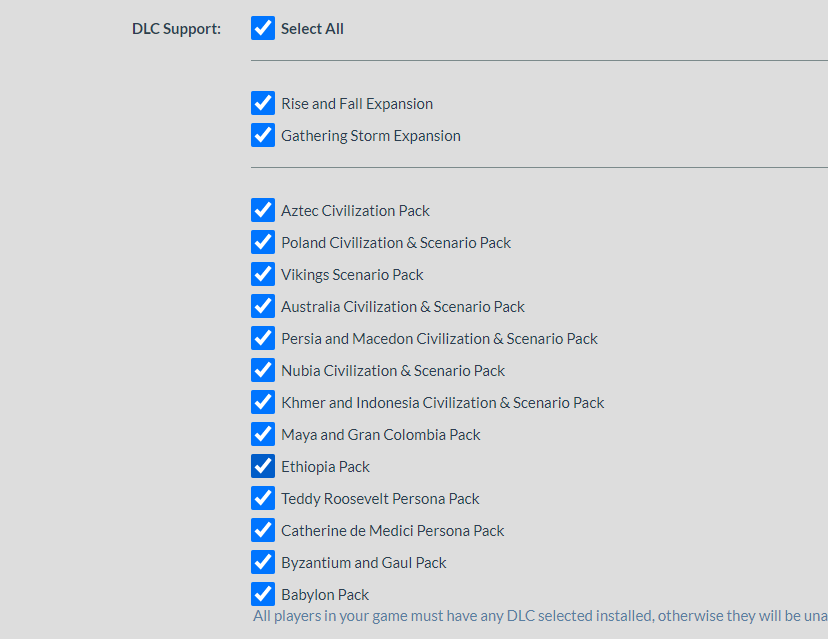 Oh well, with all that DLC, I probably can’t join.

i vote:
nay for societies
nay for heroes
yay all dlc’s

Societies is the best, Heroes are too over powered for PvP, some can just bull over cities very early

I quite like Societies myself. seem fairly balanced to me. Unless there’s a god reason not to, I’d propose enabling them.

Heroes though - completely OTT I agree.

@karstenduerotin Are you sure you have all the DLC? You previously mentioned that you didn’t. If you do have all of it, can you let me know what timezone you’re in, so I can arrange turn sequence.

I bought the season pass, as I found it for 20 bucks. I’m in GMT+1. Thanks for asking though!

Great, thanks. Not a fan of season passes usually but I actually think the Civ 6 stuff is worth the money.

Three of the four DLC which have already been released would have cost more than the reduced cost, so I took it.

I might be biased, but there is so much added content, plus new civs to tinker w/, it’s worth every damn penny

Well, many people point out it’s the price of a complete game - a valid point, too.