cannot make my move, it stucked… other saves are working

I am having a problem when loading the file now. It says that the version is not compatible. This is the only game where I have this problem.

revert turn please, by mistake i have supplied old save

Just done it, sorry for the delay

now is ok, thanks

dissapointing that Canada quit so fast. GL all

I assume this game is over for me next turn so I’ll just say GG now. This was a fun one, and a very sharp emotional heel turn when I saw the Egyptian invasion force; I really thought I was going to get to just leisurely absorb Canada and tech race.

very tight access to your last city, cannot make it quick…
In general i believe fate of this game was decided when Brasil missed moment when i started producing mounted archers, then flooding help (cause was loosing same amount of units per turn as producing-i was thinking will not take his capital), and finally when England quit the game, leaving me alone on huge continent.
You should have taken Canada in that time when i was busy, then would be interesting.
And since your attack was late, i could not let you win and increase size of land/cities. Luckily France also agreed to join this war, instead of allying with you

Now just need to decide which victory type go for.
Thanks for staying till last moment and not dropping the game.

Yeah I dont believe in quitting; even if I delay the invasion force by a turn its more than the AI can do.

Of course in this case, it wouldn’t affect things greatly. Egypt has this. I definitely should have taken Canada out earlier, but you know, its Canada. I think even the 5 turns from denouncement to declaration could have made a difference, although realistically for a good shot I should have attacked an era earlier. I didn’t see the Egyptian continent but obviously I knew what was going on over there.

GG again. would play with you guys another time.

Yes, I should have joined you instead of Egypt but I am not sure I would have been to help a lot… I will try to resist to my best. I am willing to start a new game. Any wishes on the game settings?

Usual online rules fine with me. do your thing and I’d join again

I’ll start a new game after my holidays, in 2 weeks. Have a nice end of year period

as for me , dont think will join.

1)want to reduce number of games, takes too much time.
2)i would join only games wit reliable players, quitters spoil everything (who is closer to AI after quitter -more chance to win). Also dont like players with 30+ games, they ‘overheat’ sooner or later.
3)perhaps will not play on online speed anymore, as one player said, these games are focused too much on domination victory. for standart speed it is even more important get quick+reliable players.

All the best for you all, Merry Christmas, and a very good not too hot New Year 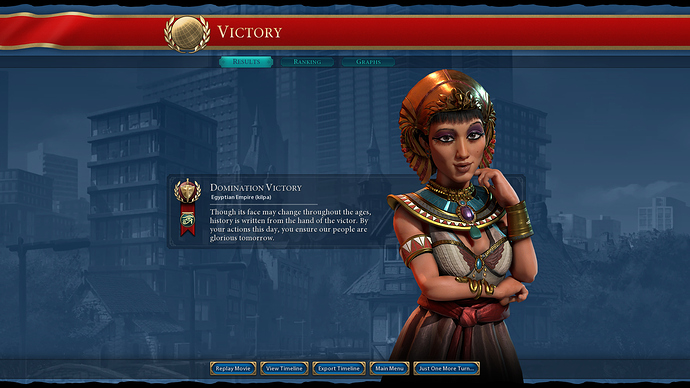 thanks for playing everybody

Thanks to everybody for playing this nice game

If there is a private game that you know of that I could join, please let me know